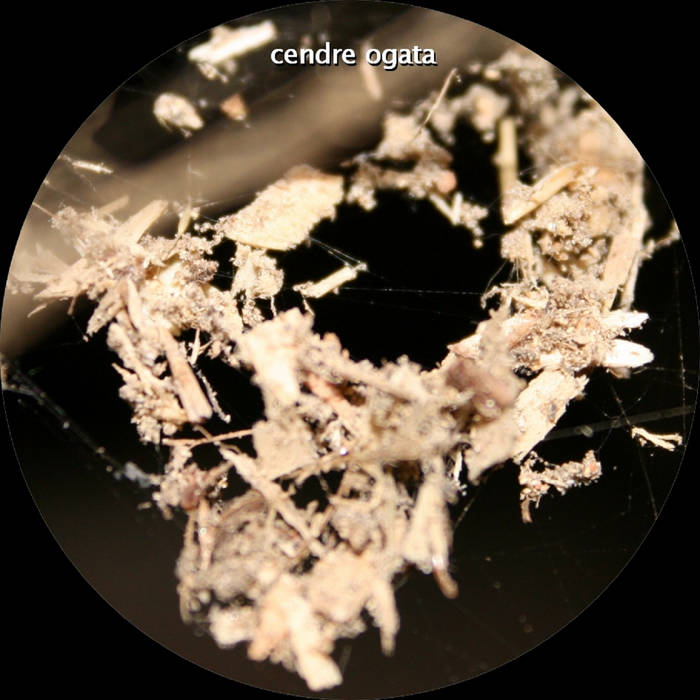 this is the very first release by cendre ogata, nom de plume of the french soundartist christophe debouit.
taking its title from a book by giordano bruno (italian dominican friar, philosopher, mathematician, poet, and cosmological theorist from the 16th century), "de magia" proposes 3 tracks where magic is indeed not far...

A CLOSER LISTEN
Belgium’s taâlem label continues to breathe new life into one of our favorite formats, the CD3″. Each season they release a new trio, representing a wide swath of sounds. The latest batch delves into tribalism, abrasion and haunted ballroom; listening to the releases in order is like walking through exhibits in a terrifying circus. [...]
If Waïssad descends into a sinister abyss, Cendre Ogata‘s De Magia rises from a mystical cellar. The French artist’s first release hearkens back to Shinjuku Thief, inspired by magic and the writings of Giordano Bruno. There’s no lushness here, no moss, no sign of greenery; the timbres are as parched as the cover, like dried sacrifices thrown into a fire. In “veldaemones”, even the water seems to evaporate. The pots and pans reverberate with hunger; a distant voice cries again and again, as if signaling a hunt. “les feux les songes” (“the fires the dreams” ignites slowly, following a desperate bout of wind, filaments wafting in the air, pirouetting in a hot breeze of sluggish chords. In the final minutes, fire and water meet, struggling for ascendance. Is the intended victim trying to escape? The birds signal a warning. The brook reddens as it flows. [...]
These releases take different paths, but arrive at the same bleak destination. This is autumn, after all, and darkness is drawing near. Play these releases while reading your favorite dark horror tales; the ghosts will enjoy reading over your shoulder and listening with invisible ears. (Richard Allen)
acloserlisten.com/2017/09/30/a-taalem-trio-2/

VITAL WEEKLY 1098
[...] Christophe Debouit is the man behind Cendre Ogata, and in case you didn’t hear his name, neither did I; ‘De Magia’ is his first release and the title comes from a book by Giordano Bruno, who was an Italian Dominican friar, philosopher, mathematician, poet, and cosmological theorist from the 16th century, and perhaps it is not easy to see where the magic comes in, unless of course you believe that within the use of electronic machines to generate music lies the true magic. Well, perhaps for the outsider is does contain a certain amount of magic. You twiddle a few knobs and this whole world of sound opens up. Cendre Ogata has three pieces of more or less traditional drone based music, of which the last, ‘Les Feux, Les Songes’, contains a bit of field recordings, I would think (footsteps in the monastery, wind and rain), but also in the other pieces there is some heavily treated sounds (bows on metal, chains) going on that all become long formed, sustaining masses of sound. This is quite the scenic music that would do well as a soundtrack to a horror movie. [...] (FdW)
www.vitalweekly.net/1098.html

thanks to jean-marc taâlem, frédéric nogray, family, friends and music