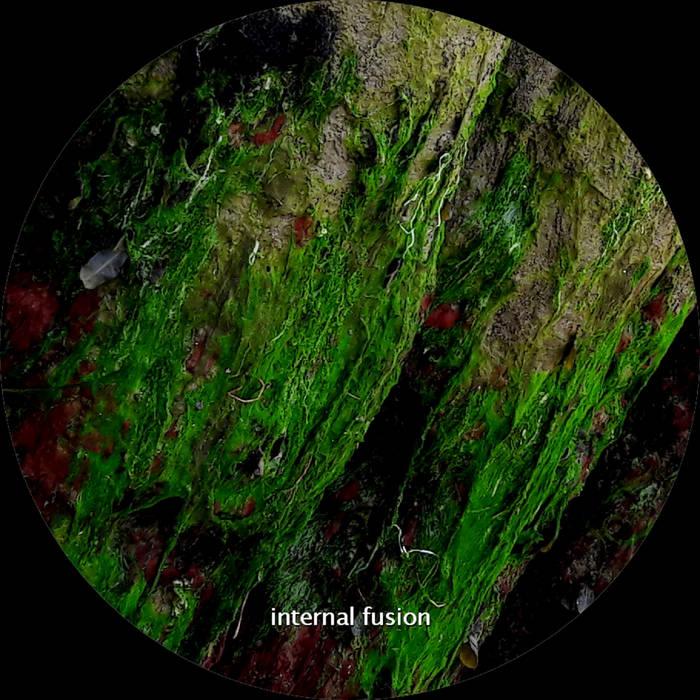 fifteen years after his first 3"cd-r on taâlem ("NedenBahe", still available at taalem.bandcamp.com/album/nedenbahe-alm-3 ), what we said at the time is still relevant. internal fusion is still a rare artist even if he's more productive than ever these days (two digital self-released productions last year) and his music is still full of captivating atmospheres... deep sounds, strange voces, haunting atmospheres. let yourself dive into "waïssad"...

A CLOSER LISTEN
Belgium’s taâlem label continues to breathe new life into one of our favorite formats, the CD3″. Each season they release a new trio, representing a wide swath of sounds. The latest batch delves into tribalism, abrasion and haunted ballroom; listening to the releases in order is like walking through exhibits in a terrifying circus.
Internal Fusion hearkens back to a time when the lines between dark ambient and industrial were blurred. The 22-minute single-track Waïssad twists and turns like an injured acrobat, sounding at first like a joyous call from deepest Africa, delving into drums reminiscent of Skull Island, then descending into the mist, where monsters dwell. The voices are holy and hooded, like those of medieval monks. Slowly the fugue builds, marked by static rustlings and speaker-wandering percussion. The cover may be green and lush, but don’t be fooled; these lands are dangerous. Waïssad’s narcotic center may represent the time spent drugged, the victim of a blow dart; the slow awakening to tribal drums is lulling until it disappears, replaced by snakelike hisses and fractured drones. There’s no escaping; all fates were sealed long ago. [...]
These releases take different paths, but arrive at the same bleak destination. This is autumn, after all, and darkness is drawing near. Play these releases while reading your favorite dark horror tales; the ghosts will enjoy reading over your shoulder and listening with invisible ears. (Richard Allen)
acloserlisten.com/2017/09/30/a-taalem-trio-2/

VITAL WEEKLY 1098
[...] As I was searching the old weeklies for previous reviews of Internal Fusion, as that is sometimes indeed done (usually after being sure there are actually some!), I found very few (Vital Weekly 348, 426 and 677), but also a few times as a point of reference, which I guess for a band that never released a lot music is quite something. It usually was done in combination with the words ‘pseudo ethnic’ and ‘drumming’, and other names never far away were Internal Fusion and Muslimgauze. In that sense this new one is a bit of a different batch of music. It starts out with something familiar, ethnic voices, lotsa reverb, but the tribalistic drumming doesn’t become part of this. Deep pounding drums are there at
one point in the middle, but in the second half of the piece things become much more abstract; Internal Fusion discovering granular synthesis and feeding their own sounds into the machine, perhaps even the first ten minutes of ‘Waïssad’ to it, and let computer gremlins eat the whole piece and slowly we enter the belly of the monster. If this is something that Internal Fusion would explore further and incorporate in their usual brand of ambient drumming and deep moods, then it could blossom into a very rich new sound approach. (FdW)
www.vitalweekly.net/1098.html